In the midst of discussions about race, I often hear white Americans justify their refusal to meaningfully consider the impact of America's racist history by responding “my family didn’t even own any slaves.” It’s a common refrain meant to divest themselves of America’s original sin. If their family never owned slaves then they (their familial legacy, their familial inheritance, and their ensuing familial responsibility) cannot be responsible for the havoc slavery and its progeny wreaked on Black and brown communities, right? Not exactly. That reasoning reflects a flawed and narrow over-simplification of the system of slavery. Only about 21% of white families in the South owned slaves. These were not, however, the only people who supported the system of slavery. Slavery’s existence and success required the participation and support of non-slave holding whites too.

This support and participation took on a variety of forms. Some people participated often and directly in slavery having frequent interactions with slaves as a slave trader or a plantation overseer. Some of this support ebbed and flowed depending on the circumstances like when non-slave holding families had the means and need for “hired hands” and rented slaves from their neighbors. Other support manifested as the intellectual and religious framework used to support the system of slavery morally with religious interpretations and pseudo-science that rendered slavery natural and just. Each of these building blocks was a necessary part of erecting the hellish prison of slavery.

Non-slave holding families frequently rented slaves from neighboring families to work their land. This was beneficial for both the renting and owning families as the renting family did not have any of the overhead expenses like clothing and shelter while the owning family received an additional ROI besides just labor and offspring. Also, slaves were a status symbol, even when all you could do was rent them.

Renters frequently abused the slaves by implementing the same brutal violence as those who owned the slaves and the renters’ ability to discipline the slave was often referenced in the rental agreement. In fact, scholars opine that renting out slaves “bolstered rather than compromised slavery, and also helped build cross-class solidarity among whites in the slave South.”

Managing several acres of land and several “field hands” was itself a form of labor that the ruling class eschewed. If slave owners had been interested in doing work, they’d have no need for slaves in the first place. For these reasons, enslavers regularly employed poor whites as overseers on their plantations. These employees were essential to the operations of the plantation.

Overseers were responsible for ensuring that slaves maximized their productivity by whipping those who rested or worked slower than other slaves. At the end of a day’s work, it was customary for overseers to weigh a slave’s pickings for that day and administer punishment if a slave failed to meet designated quotas. If a slave exceeded their quota, that number became their new minimum. Overseers also administered punishments for things like showing sympathy for other slaves being disciplined. 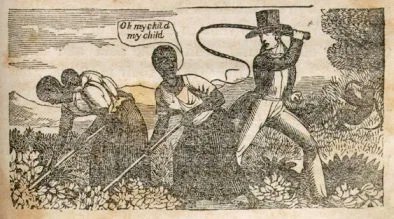 Some people who never worked a slave a day in their life still made money from the traffic of slaves. These were spectators of sorts who made their fortune buying and selling other people’s slaves. This was common and grew increasingly common as America gained independence and slavery spread further westward and further south during the period after the American Revolution.

Traders would be given a slave to sell for $800 and sell the slave (after freshening them up and embellishing their attributes) for $1200 and pocket the profit. They marched coffles across the country to do this and became incredibly wealthy in the process.

Slave patrols were the origins of modern police departments. In the 17th & 18th century, colonists began passing slave codes. These laws delineated the all things slaves were not allowed to do such as read and write, gather in groups unsupervised, own property, enter into contracts, and leave the plantation without permission. These prohibitions along with the increasingly common fear of insurrection required the use of a policing agency.

Slave patrols were responsible for ensuring that slaves complied with the laws, investigating and thwarting insurrectionary plots, and capturing and returning slaves to bondage. Historian Gary Potter frames the responsibilities this way: “(1) to chase down, apprehend, and return to their owners, runaway slaves; (2) to provide a form of organized terror to deter slave revolts; and, (3) to maintain a form of discipline for slave-workers who were subject to summary justice, outside the law.”

Many other facets of the community directly supported the institution of slavery. Ministers, for example, taught a version of Christianity to slaves that justified slavery as God's will. Slaves were told that bondage was their natural and proper condition ordained by God and that opposing slavery would be going against God. Not only was this a form of psychological abuse but it also provided enslavers and those who supported slavery with moral cover. Scholars published papers (supported by “science”) arguing that Blacks were better suited for slavery than freedom and were inherently inferior to whites. Judges, like Justice Taney, who increasingly interpreted laws to further slavery’s hold on the country also supported the institution with the legal precedence his pen crafted. Merchants who manufactured slave goods like whips and coffle chains also benefited from the slave trade. Almost all of the slave ports were in the North and so were many of the textile merchants that depended on southern cotton. Others, like Jack Daniels, learned a skill from slaves that he then capitalized on in addition to the unearned market advantage of not having to compete for market share with his teacher. This slavery market advantage benefitted non-slave holding whites in every economic endeavor.

Slavery wasn’t some isolated institution that only the individuals who owned slaves participated in. It was a societal wide institution with interconnected entities like churches, local municipal departments (like the ones that issued permits for slave auctions), and family units that most white people directly or indirectly participated in and benefited from. Systems of social control cannot exist without societal support. At the start of the Civil War, a majority of whites in the North and South opposed emancipation and their buy-in was necessary for slavery to work. Citizens needed to report slave wrongdoing and adhere to social norms that circumscribed the lives of slaves. Children were frequently reared under these same sensibilities so that they’d perpetuate this system in their adulthood. The social construction of race required poor whites to buy into notions of racial superiority to avoid an alliance between slaves and poor whites whose labor was also being exploited. It is futile and uninformed to absolve one’s self of any connection to this history and any ensuing responsibility to address the inequities this system produced.